Will the Killing of George Floyd Remake South Minneapolis?

Will the Killing of George Floyd Remake South Minneapolis? 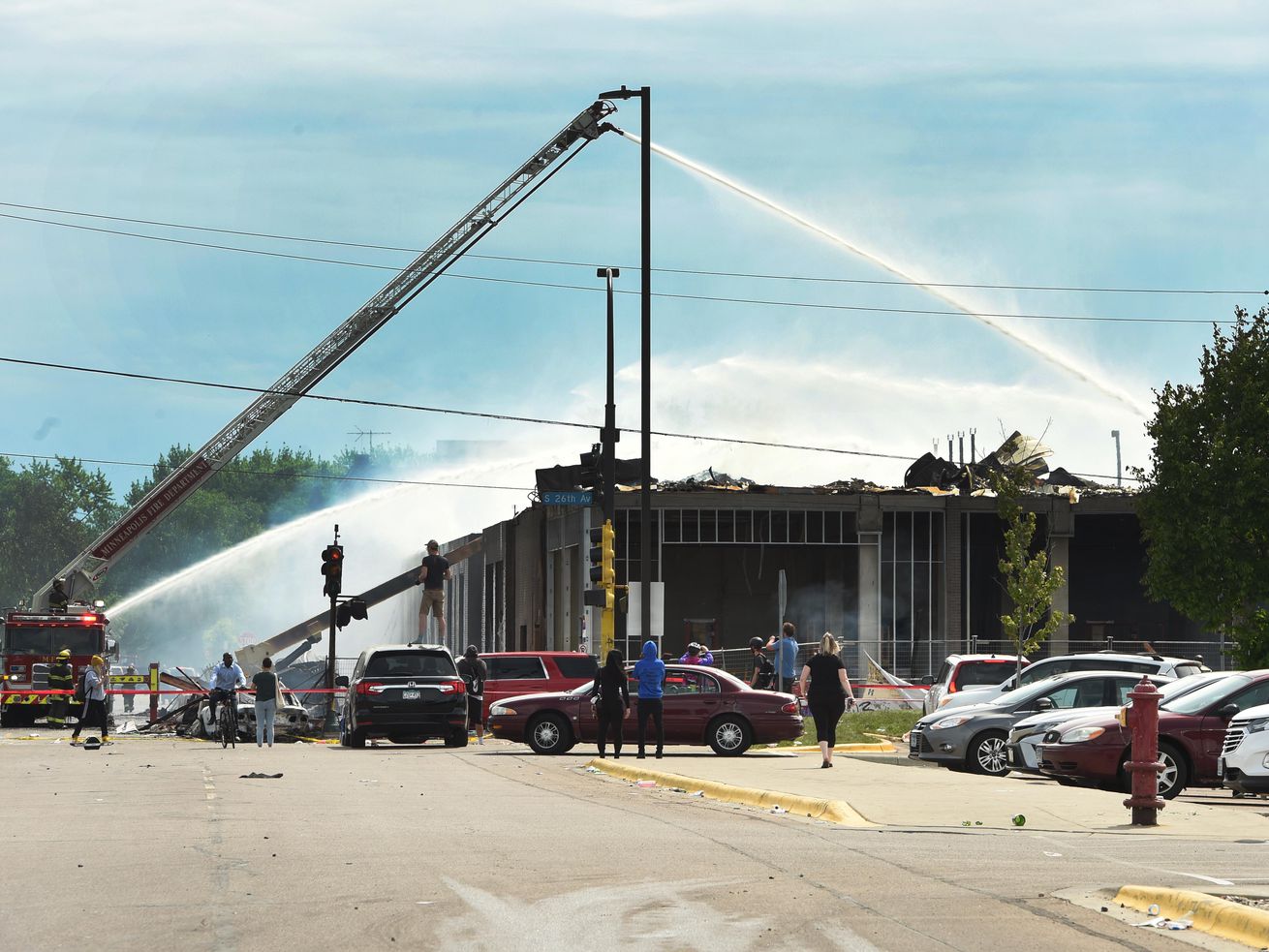 Many buildings along Lake Street in South Minneapolis were severely damaged during protests sparked by the killing of George Floyd. | MediaNews Group via Getty Images

With many businesses destroyed or damaged, residents are working together to meet the needs of their neighbors.

In the parking lot of a towering brick church just before 9 a.m. on a recent Saturday, Brittaney Abodunde, a Black woman with a huge smile and a walkie-talkie in hand, was rushing to get volunteers in place to sort through donated bottled water as quickly as possible. “You set up the tables last week, right?,” she asked two young men who nodded yes. “Do the same thing again.”

Abodunde and the army of volunteers at Christ Church International, located on the corner of Lake Street and 13th Avenue South in South Minneapolis, were working to fill the void for a community left with no grocery store, no pharmacy, and no place to grab household essentials.

More than a month after George Floyd was killed by police and anger spilled out onto Lake Street, many storefronts are still boarded up. The smell of smoke lingers from the buildings that were burned to the ground. For the businesses left standing, it’s hard to tell what’s open and what’s closed. While the retail landscape was extensively damaged, community members are stepping up and turning the commercial corridor into a triage center to meet the neighborhood’s most urgent needs.

Once the plywood begins to come down, Lake Street will be fundamentally changed. Longtime residents like Azeta Garthune want more than buildings to rise again: “When the spotlight moves on, a lot of folks, especially a lot of marginalized communities of color around here, don’t want to be forgotten about and get left to the side. We need to keep a sharp focus on that.”

Already, the Lake Street Council, a nonprofit that supports businesses along the corridor, has raised $6.1 million from around the country to help rebuild. The organization recently announced a community-led board to oversee the distribution of funds to the hardest-hit businesses, many of them small and minority owned. As the rebuilding phase slowly starts, many residents hope to keep those businesses thriving, fund and build more affordable housing for families, and set an example for what an equitable neighborhood can look like.

Abodunde, a professional event planner who has been on furlough since the beginning of the pandemic, is one of those residents dedicated to making her neighborhood better and stronger. Instead of waiting for change to happen, she’s doing what she can now, helping her church fill Bags of Hope with food and other essentials to give away.

“All the stores are closed, so we are doing what we can as a church to help the community,” she said as she picked up a container of donated baby diapers to put in a box labeled “0–1 months.” They’re a small part of a care package that will include laundry detergent, paper towels, bottled water, and nonperishable food that will be given to anyone who needs it, no questions asked.

Just up the street, a group of 20 mostly white volunteers from the Longfellow Community Council gathered to help clean up litter and graffiti. It’s a targeted cleanup, as the community is trying to find a way to save murals that have been painted on the sides of buildings and plywood panels, many featuring Floyd’s face, as they rebuild and reopen.

“Keep anything that says ‘George Floyd’ and ‘Black Lives Matter’ or anything that has a powerful message,” Justin Gaarder, the council’s program manager, said to an elderly white man, wearing a face mask and holding a brush, who had asked what graffiti volunteers should keep and what they should scrub away. “We want to get rid of the profanity because families live here.”

Elsewhere in the neighborhood, volunteers have formed a community mutual-aid agreement to help a nearby homeless encampment after the people living there were displaced during the protests. Groups of white residents in the adjacent Longfellow neighborhood have organized anti-racism workshops as well. (The neighborhood around the damaged part of Lake Street, known as Central, is very diverse and is home to a historic Black community; Longfellow, for its part, is predominantly white.)

“We’ve been communicating and working with organizations that we’ve been close to geographically for a long time, but not like this,” said Gaarder. “There’s a lot more partnerships between community organizations right now, and I think that will continue into the future.”

This isn’t the first time Lake Street has had to rebuild. In the early 1980s and ’90s, this corridor in South Minneapolis was a troubled neighborhood, Garthune said. She remembers the rows of empty buildings on Lake Street being filled with crime. “It was hard,” Garthune said. “My parents wouldn’t let me leave the house alone.”

Still, she said, there was a strong sense of community between the many young families with children — mostly Black, Latino, and East African — who were moving in and calling the area home. (Her own parents immigrated to Minneapolis from Guatemala.) These new residents slowly turned Lake Street into a bustling cultural corridor filled with business that reflected its residents, from Mercado Central and the Midtown Global Market to the nearby Somali Karmel Mall.

“These businesses were born out of necessity and creating opportunities for employment,” said Garthune. “It’s all gone now, but I don’t think people from the community are going to let anyone forget about it.”

Search the full MLS and Exclusive Property Listings.
(Prices and inventory current as of January 20, 2021)