The best cooling weighted blankets, according to experts

The best cooling weighted blankets, according to experts 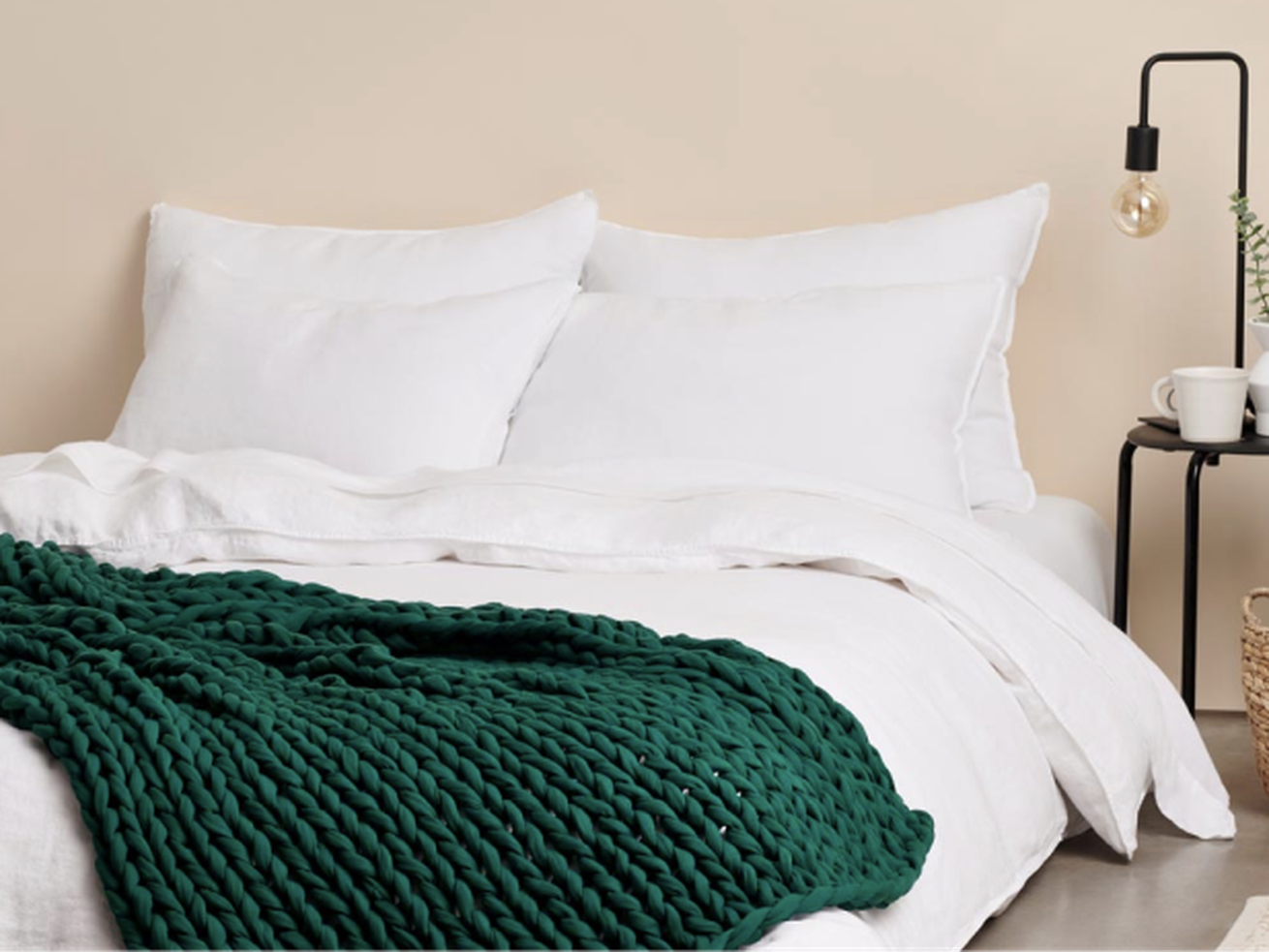 Weighted blankets are known to relieve anxiety and improve sleep quality, but for anyone who runs hot at night (or is anticipating a steamy summer indoors), lying under 10% of your body weight may sound more stifling than soothing. That’s what makes cooling weighted blankets, which claim to reduce stress and body temperature, so appealing.

For most blankets in this fast-expanding category, the cooling factor comes from the outer cover material, like bamboo, though a few rely on innovations like “hydro-powered technology.” There are also weighted blankets that are comparatively cool, like those made from cotton or cotton-bamboo blends, that aren’t actively cooling. “Ultimately, a weighted blanket isn’t necessarily cooling just because it’s advertised as such,” warns Sarah Riccio, senior writer and bedding expert at Sleepopolis. “Ask yourself, ‘What part of this blanket’s construction is the cooling part?’ If there are no special textiles or cooling fabrics to be found, chances are, it’s just a regular, temperature-neutral weighted blanket.” Ben Trapskin, founder of Sleep Sherpa, agrees: “I think it’s important to have realistic expectations,” he says. “There’s only so much cooling that fabric can provide.”

As tenuous as the claims may be, a good cooling weighted blanket really can make a difference in your sleep quality. While “more-extensive research is needed before we can pinpoint the effectiveness of weighted or cooling blankets,” says Dr. Sanam Hafeez, a neuropsychologist in New York City and faculty member at Columbia University, “anecdotal evidence shows those who purchase either or a combination feel very happy with its effect on their sleep.” Along with testing quite a few of the options myself, I consulted a handful of sleep experts and health specialists to find the best cooling weighted blankets (and a few simply cool ones, if that’s what you’re after).

Riccio raves about the Bearaby Tree Napper, an ultrathick knit design that gets its heft from jumbo-sized yarn made of organic Tencel Lyocell fiber. “It’s a uniquely cooling weighted blanket in that it’s made entirely from Tencel, a cool and moisture-wicking fabric that feels soothing on the skin and can help stave off night sweats,” Riccio says. She likes that the open-loop weave design “promotes a ton of breathability,” and it also distributes weight evenly over the body, something most duvet-covered weighted blankets (cooling or not) don’t do. This one’s also sustainably made and biodegradable, in contrast to the synthetic cover materials and plastic pellet or bead fillings that many weighted blankets are made of.

Like Riccio, I’ve also personally been impressed by the Tree Napper. Its weave feels delightfully chilly to the touch and stays that way for a while, and the hefty weave’s airflow is noticeable. I’ve also found that the wide holes between yarn strands are soothing and anxiety-quelling to poke and curl your fingers through while dozing off. However, Trapskin does note one downside to its heft. “You can wash the entire Bearaby blanket,” he says, which is unlike most weighted blankets, which have a duvet you have to remove and wash separately. But because it’s quite heavy, “it takes a long time to dry, so I would recommend line drying if possible.”

Gravity’s the weighted blanket that started a worldwide craze, so it’s no surprise that their cooling weighted blanket is a fan favorite, too. They decided to create a cooling version in 2018 based on customer feedback that the original weighted blanket was too warm; Mark Wynohradnyk, Gravity’s brand director, says their cooling variety now outsells the original one from April to September. The inner layer is the same as the brand’s regular weighted blanket, filled with special glass beads that Gravity says are more breathable than plastic poly pellets. What sets this one apart is the technical polyester that wicks moisture away from skin. “It’s covered in the brand’s proprietary fabric that’s designed to actually cool the body down and relax you at the same time,” Riccio says. I’ve personally found that Gravity’s cooling weighted blanket feels at first a little like sliding under a nice-quality sheet that’s been stored in a freezer, though the chilliness is subtler after an hour or so.

Trapskin calls this one a “a completely different take on weighted blankets.” He notes that it’s quite expensive, with prices starting at $499, but it may be worth it for those who “live in a very hot climate and don’t want to run the AC all day.” The fuzzy fleece cover and heftiness are similar to most weighted blankets, but that’s where the similarities end. The inside layer of this blanket is laced with rubber tubing filled with temperature-regulated water. Once the control unit’s water chamber is filled, you plug it in, power it on, and set it to an exact temperature of your choice (which you can do on the buttons of the unit itself or from the included remote). Riccio praises its hydro-powered tech as “super-innovative,” though she says “it requires much more maintenance than other weighted blankets on the market,” such as cleaning and refilling the water chamber.

Fans say it’s worth it, though. Juliet Starrett, co-founder of online fitness platform The Ready State, has used this blanket for six months and says her sleep quality “immediately improved.” She’s tried weighted blankets in the past, “but even as a colder sleeper, it would feel like 1,000 degrees. I’d be sweating and would have to take it off immediately.” With this one, “I don’t necessarily feel like it’s cooling me, but it makes me not hot.” The control unit’s gentle whirring took her few days to acclimate to, but ultimately the white-noise effect became an “extra bonus I didn’t really anticipate.” In my own experience, I also found that the ongoing water flow inside the blanket creates a hypnotic, slightly tingly sensation that takes some getting used to but is ultimately very soothing.

Another favorite of Riccio’s is this clever double-sided style. She likes the duvet cover’s flexibility factor, as “one side is warm is cozy, and the other is cooling on the skin, which gives sleepers the chance to pick the side that best suits their temperature preferences at any given time.”

Trapskin’s top pick is this double-sided option from Helix (which makes one of Strategist’s favorite mattresses, as well as gift-worthy weighted blankets). “It keeps you just as cool as the other weighted blankets on the market but still feels super-cozy,” Trapskin says. It’s also a touch cheaper than Brooklyn Bedding’s version. “The sheared microfiber gives an extra-soft, plush feel, and if you want a smoother feel, just use the other side,” he says. He also likes the glass-bead filling, which doesn’t trap heat (though it does make for a notably heavy blanket, he adds), and says the removable, washable cover is convenient to clean. “Overall, it’s quality construction with a great feel at a really good price,” Trapskin says.

This Kickstarter-fueled blanket has a bamboo-cotton blend cover that feels like a really soft set of T-shirt sheets and promises to be “the coldest fabric in your house.” Riccio tried the Hush Iced at a friend’s house and was impressed by the “soft and breathable” feel. “The bamboo-cotton blend is moisture-wicking and airy,” though she notes that it doesn’t actually feel cold to the touch, unlike some other cooling blankets. Susan Murphy, a digital-marketing entrepreneur and weighted-blanket enthusiast, loves this Hush version so much, she raved about it on Twitter. In just a week, Murphy says the Iced had “already made a huge difference” on her sleep quality. “I suffer from anxiety, and this blanket really helps me to fall asleep fast and stay asleep,” she told me, adding that it’s “remarkable how temperature-regulating it is.”

Dani Donovan, creator of ADHDDD, a community platform for adults with ADHD, says this Strategist-approved YnM bamboo-covered option is “one of the best purchases I’ve made in a long time.” She ordered the YnM after first trying the classic Gravity Blanket, which she liked but ultimately found too hot. “I couldn’t use it while sleeping without getting sweaty,” she says. In her search for a cooling version, Donovan went with the YnM because of its more affordable price point, and she calls it a “game changer.” She says the blanket “gently cools me off without being too cold,” and she likes that she “can control the amount of cooling by putting it above or below my sheet.” She’s also sleeping better: “My husband told me he’s noticed I don’t move around in sleep anymore,” Donovan says. “All in all, it exceeded my expectations and has significantly improved the quality of my sleep.”

This is the weighted blanket of choice for Dr. Frank Lipman, chief medical officer at The Well, and while it isn’t technically cooling, the 100% cotton cover makes it more breathable than many other weighted blankets on the market. “I have it myself and have a number of patients with good results who have tried it,” Lipman says. The blanket’s design has cool quilted channels rather than the gridded quilting most bead-filled styles, which makes for better airflow.

If you already own a weighted blanket or are more interested in coolness vs. weight, consider a bed addition made from Outlast’s innovative fabric, which was originally designed for NASA. It’s the most impressively cooling material Lara Smith, founder of moisture-wicking sleepwear brand Lusomé, has come across in her extensive R&D in the temperature-regulating sleep space. There aren’t (yet) any brands making weighted blankets from Outlast’s material, but Hammacher Schlemmer makes a rather nice unweighted option that contains millions of invisible microcapsules, which absorb heat when one is hot (and release heat when one is cold). “[Outlast’s] technology is proven to absorb and pull away body heat, store it, and release it back to the body as needed, so it offers true thermal regulation,” Smith says.