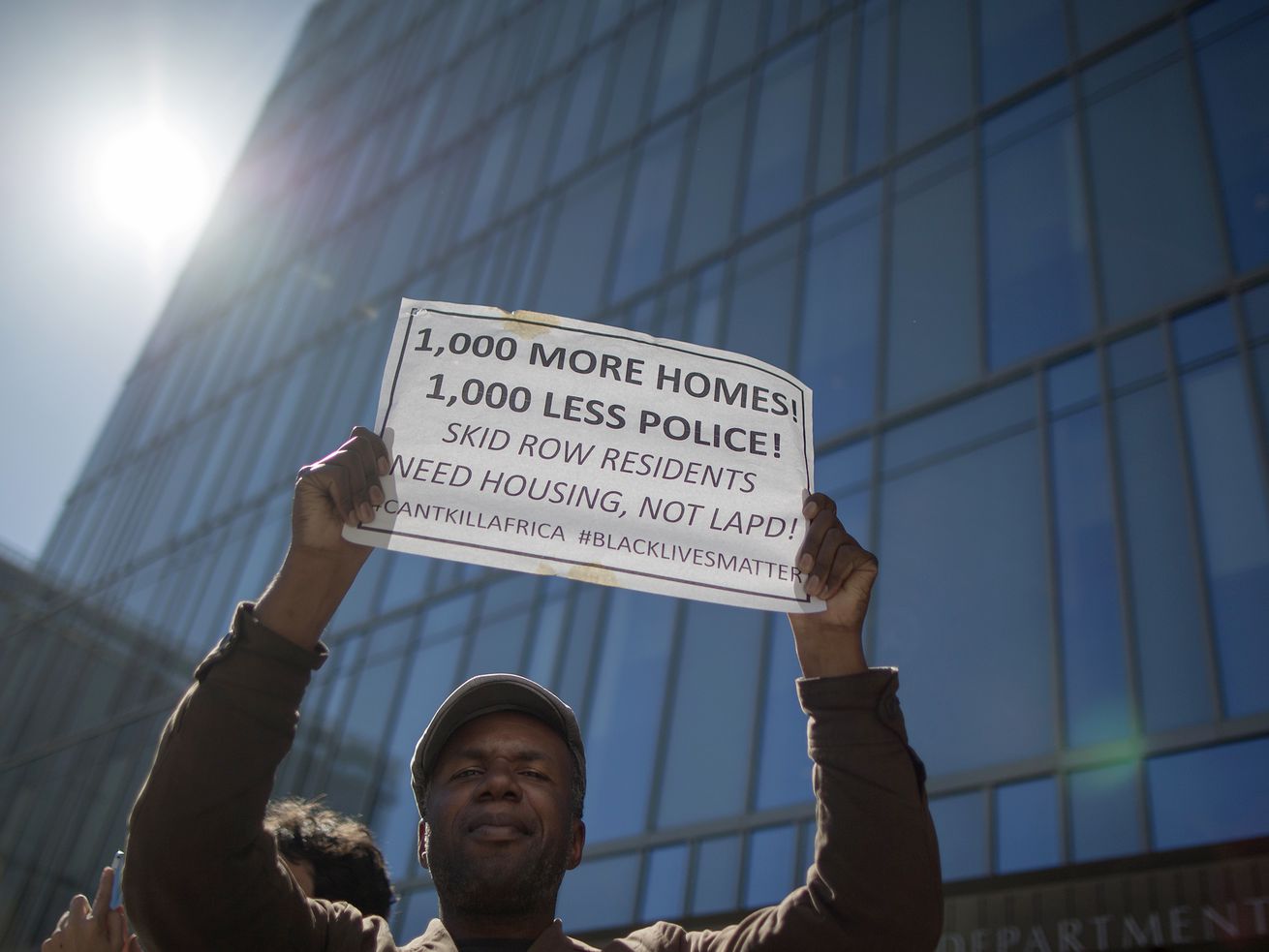 A protester speaks out about the fatal LAPD shooting of an unarmed homeless man named Africa in 2015. | Photo by David McNew / Getty Images

“If we fix the system for black people, we’ll fix it for everyone.”

During the 15 years in which LaRae Cantley was homeless, she remembers feeling perplexed about what was preventing her from being able to find safe, affordable housing for her family. She never seemed to have all the information on how the system worked, or access to the right resources, or the correct number to call. But Cantley, who is black, knows now: She was locked out of the process because of racism.

“There’s this idea that if you get a great job or you go to a great school, you won’t be homeless, which is bullcrap,” she says. In fact, she says, the systems that were created to help people secure housing were not designed for black families like hers. “You start to see that this was strategic — that you would not be welcome in certain neighborhoods, or that you would not be comfortable in certain places.”

Now, mass protests over the killing of George Floyd and other unarmed black Americans at the hands of police have drawn hundreds of thousands of people into city streets, leading to reckonings across society, including calls for housing reforms. Like Cantley realized early on, homelessness is another U.S. crisis pervading nearly every aspect of daily life that disproportionately affects black Americans, and it’s one that must confront racism in order to solve it.

According to a report this month by the National Alliance to End Homelessness, African-Americans make up 40 percent of the U.S. homeless population despite only representing 13 percent of the general population. That number has increased in recent years, even as the rate of homelessness for other ethnicities has gone down.

Cantley’s frustration with the city’s housing system spurred her to join forces with Molly Rysman, another homeless advocate, who is white, in 2016. The two launched initiatives including the Housing Justice summit and Housing Justice Los Angeles podcast, which work to reframe homelessness solutions through a racial-justice lens.

Rising housing costs, the reduction of social services, and a growing wage gap are among the causes of homelessness, says Rysman, but all those factors can be traced back to one root cause: white supremacy.

The topic of white supremacy comes up often for homeless advocates, says Rysman, but most white people don’t see the connection between their own actions and homelessness because it’s so deeply ingrained in U.S. history, from exclusionary zoning policies like redlining to predatory lending practices that prevent the accumulation of generational wealth.

“One of the ways white supremacy works is that we have these very sanitized conversations,” she says. Using terms like “gentrification” and “displacement” has, over time, made the process of erasing black communities seem less threatening, for example, even as cities have seen precipitous drops in the number of black residents. Rysman prefers “racial banishment,” which she says more accurately conveys what is happening.

“Words like ‘gentrification’ have become meaningless because they apply to so many different things, but there is a lot of racial banishment that occurs in Los Angeles and other cities as well,” she says. “It is a physical process. It’s not a theoretical or an economic process — those things play into it — but it’s something that happens where people are physically not allowed to be in particular spaces.”

For decades, homelessness solutions were “color blind” and did not address growing racial disparities. Several Obama-era housing reforms were intended to address discrimination and segregation, like the Affirmatively Furthering Fair Housing provision, but did little to address the inequities in federally funded homelessness programs.

Now, the diverging trends in black and white homelessness are growing more stark, says Jacqueline Waggoner, vice president and Southern California market leader of Enterprise Community Partners, and co-author of a 2018 report by Los Angeles County’s homelessness authority on black homelessness. One in 33 black Angelenos will experience homelessness at some point in their lives, compared to one in 250 white Angelenos.

“Those data points really send it home for people to understand the level of disparity and why we have to talk about black people experiencing homelessness,” she says. “If we fix the system for black people, we’ll fix it for everyone.”

To compile the report, Waggoner’s team traveled throughout L.A. County, speaking to black Angelenos who were living on the streets, in vehicles, or in shelters. One of the issues brought up most frequently was trust, she says. “They don’t trust systems, and you can see why when the infrastructure of those systems are built on racism,” she says. “To have an effective and impactful strategy, you need the voice of the people.”

Putting black Americans with lived experience of homelessness in leadership positions would help combat that mistrust and change the systems, she says, and it’s one of 67 recommendations the report put forth for L.A. County. These policy recommendations are particularly relevant now as L.A. mayor Eric Garcetti has pledged that up to $250 million might be diverted from police spending to black communities.

But white residents of cities also need to realize that they’re part of the problem, says Rysman.

“In terms of what school we send our children to or what changes we advocate for in our neighborhood, we all weaponize our whiteness,” she says. “There’s a lot of work that we still need to do to become aware of those practices and to shift them in our own lives.”

Theo Henderson, the host of the We the Unhoused podcast, lives in a park in L.A.’s Chinatown, where he says he has had police called on him by people claiming he's mentally ill, doing drugs, and endangering children. “If you see me in the park trying to survive and you don’t like that, you feel I’m an eyesore,” he says. “You spend a lot of money and resources that go to police who will criminalize me or harass me.”

But because he’s black, harassment can quickly escalate beyond just a complaint, Henderson says. “All it takes is a phone call from an irate white person to set things in motion that will lead to incarceration or death.”

Calls to defund the police should also include defunding business improvement districts (BIDs), neighborhood-watch groups, and apps like Nextdoor and Citizen which encourage surveillance and documentation that puts the lives of black homeless residents at risk, says Henderson. “We don’t examine how dangerous to people of color BIDs are,” he says. “I have watched the BIDs target people of color, particularly black people, by taking photos of them falling asleep with their belongings.”

Henderson is hosting a series of online conversations to discuss the triple threat of crises currently facing the black community — homelessness, COVID-19, and police brutality — and how they all are products of racism. It’s his hope that the Black Lives Matter movement can help his white neighbors reckon with their own harmful behavior, he says. “It takes a community of people who don’t like a person of color to create a picture of me in the most unfavorable light.”

Cantley also says she envisions group discussions as a “starting place” where wealthy white residents can hear from black homeless residents and start to acknowledge how their privilege could be leveraged as part of the solution. “We’ll see how, as people, we are able to meet the human need when we’re in connection, and how sharing experiences, networks, and resources permits us to do so,” she says. “What does the success of a restorative world look like, and what do you contribute to it?”

In a recent episode of Housing Justice L.A., Cantley interviews her son, Melvin, who is a musician. They discuss how he was shot while standing outside their home, the fear he still experiences in public spaces, and how that trauma permeates every decision about where and how they live.

“All this rooted hatred that is handed down for decades, it impacts one’s mental well-being,” she says. “And when you are unable to settle with your thoughts and to think things through, then how could you not end up homeless — unless there’s someone you know that has a house waiting for you?”

Search the full MLS and Exclusive Property Listings.
(Prices and inventory current as of January 16, 2021)