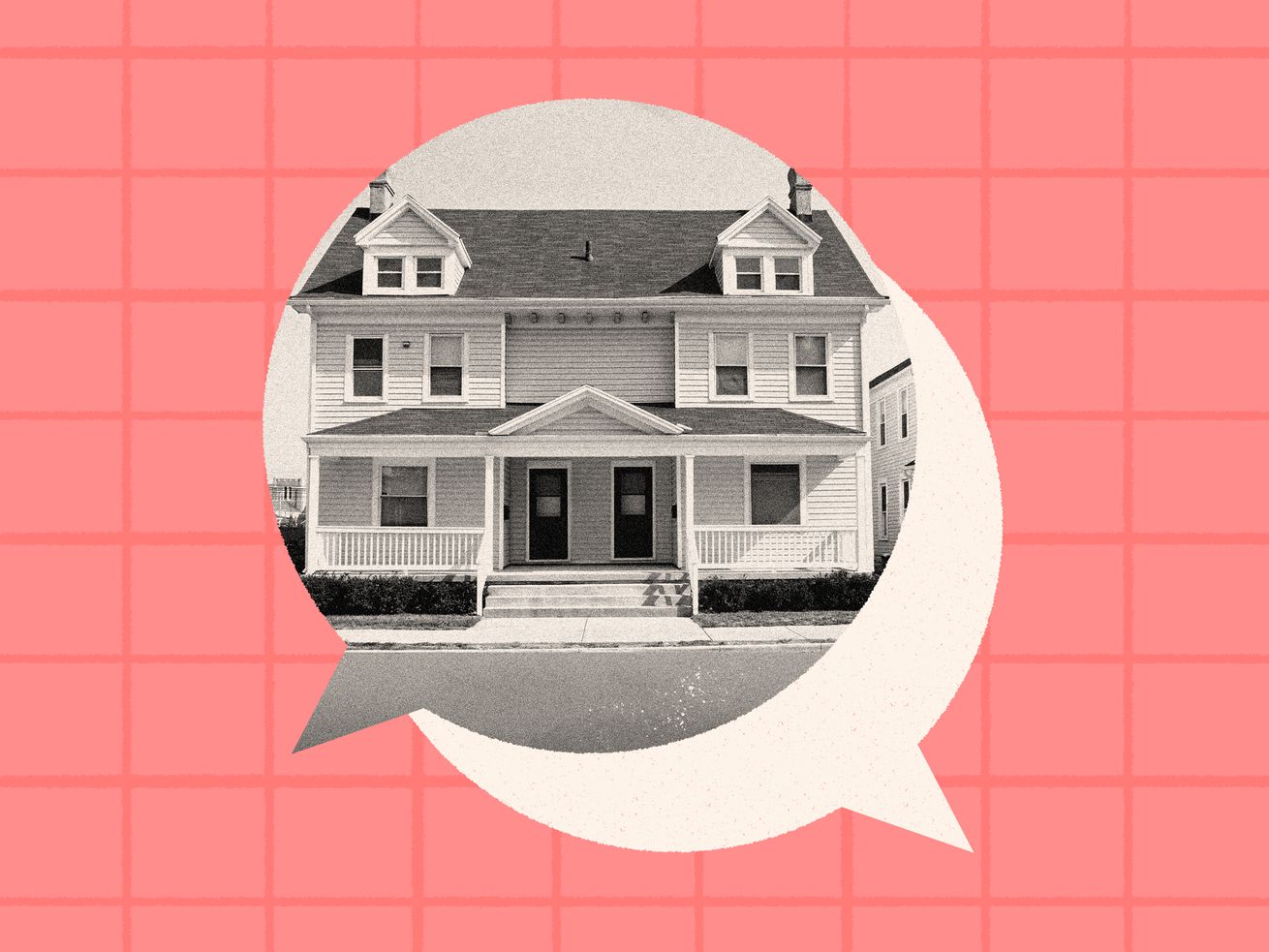 “Money would never get in the way of our shit.”

When Ali Fantl met Gabe Hernandez in 2012, she was applying for a job as a counselor at the Hoboken, New Jersey, prep school where he worked as a teacher. He wrote down his email and invited her to reach out with questions.

Fantl took the job, and the two became fast friends. It helped that Fantl got along incredibly well with Hernandez’s wife, Rachel Elmer—after he introduced them, she says, “Gabe got upset because I’d stolen his friend.”

Six years later, Hernandez and Elmer bought a two-family home, and invited Fantl and her husband, Vito Cataldo, to move into one half. Each family occupies a floor of the house; they share the foyer, basement, and backyard.

When COVID-19 hit, the families (Hernandez and Elmer have a 3-year-old son, Fantl and Cataldo’s children are 2 and 1) knew they were going to have to weather it together. Having companionship has made life easier throughout the ordeal, the couples say, even though, like everyone else, their world has been upended.

Hernandez, who left teaching to become an actor, is now in full-time dad mode while doing some modeling for art classes and bachelorette parties on the side. Cataldo, Elmer, and Fantl are all able to work from home—Fantl as a school counselor at a different institution, Elmer as an independent educational consultant, and Cataldo as a business manager—though without outside childcare, that’s a challenge.

The setup isn’t permanent: Fantl and Cataldo are moving to Connecticut to be closer to family later this year. But in the meantime, it’s given both couples a unique experience of neighborliness, so Curbed sat down with them after the kids were in bed to talk about what it’s like to share space right now.

Curbed: Were you anxious about having your relationship go from casual to official?

Ali Fantl: There was a lot of like, Are you sure? Are you sure? I remember my sister said, “Oh, you have to do that, you must move in with them, that’s amazing.” And that gave me the green light to be like, Okay, someone else thinks this is a great plan.

Vito Cataldo: One of the first things I asked for was a lease contract.

Vito: Which we never did move forward with.

Gabe: I told my parents together that this was happening. My mom was excited; she loves Ali and Vito. My dad immediately wanted to know what the financial arrangement looked like.

He said, “Cuentas claras conservan amistades”—clear contracts sustain friendships. So my dad was in my ear like, “Yo, make sure you’re protecting yourself. You don’t want that shit to get in the way.’ And I was like, “Shut the fuck up. You don’t know our friendship. We’re already on some kibbutz shit. Money would never get in the way of our shit.”

Vito: I just wanted to have clear separation of things. Now it’s just clear, because we’ve been doing this for a while.

Vito and Ali’s floor was ready first, so they moved in in August 2018, with Rachel and Gabe following several weeks later. These days, there are so many strollers on the front porch that neighbors have mistaken the house for a day-care center and tried to drop their kids off to play.

Curbed: Rachel and Gabe, when you asked Vito and Ali to move in, what were you looking forward to? Were you already thinking about shared childcare?

Rachel: I really wanted a mom friend. Being a young mom can be so isolating, and having that friend was so important to me that I truly would go to any lengths to have that in my house. It was more about me having companionship. Which is a kind of sharing of childcare duties!

Gabe: I never could have anticipated how much of a difference it made, childcare-wise. ’Cause the math doesn’t change—if I’m in the basement with, say, Vito and the kids, it’s two adults and two kids. It’s not different, ratio-wise, than if I’m with my kid alone. But the two of them have each other, and me and Vito just get to chill. It’s infinitely easier just having that many bodies, of all ages, to switch it up.

Vito: Of course, one of the huge perks was that Lane would be around Elias all the time. We only had one kid at the time, so that was great for us.

Ali: Vito in his work travels quite a bit, normally, so having helping hands, especially with the second kid, too, it’s just—even if it’s something like, “I have to run out and move the car, can you watch the kid for two minutes?” It just makes life so much better.

Curbed: So when the virus started happening, at what point did you sit down to hash out what the house rules would be?

Ali: We said, “Okay, so we’re doing this together.”

Gabe: How else would it work? “You guys get the basement, and we get the backyard”? We’re gonna be touching everything—it would have been impossible.

Curbed: There was no conflict about, How seriously do we really need to take this?

Rachel: We agreed: This is a big deal.

Curbed: How has it been having everyone be home all the time?

Vito: With me and Al, we set up office hours every day; we trade the kids off. We try to sync up our calendars so we can schedule when it’s work time and when it’s watching-the-kids time.

Rachel: I had the least change, ’cause I already worked from home. Now I can hear the kids playing in the backyard; I have to take lunch hour off ’cause Elias will throw a tantrum if I don’t sit there with him while he eats. It’s amazing—now, when I’m taking phone calls, I look out the window and it’s like three naked toddlers in the backyard.

Ali: I think about this a lot—thank God they have each other. I have friends who are parents who are so worried about their children and how they’re developing socially, emotionally. I don’t worry about that.

Gabe: I’ve had a number of ups and downs over the last couple of months, but I hit a low point these last few days, just feeling super-depressed about how shitty all of the virtual versions of the performing arts that I used to do are. Because everyone’s trying to stay positive, we’re just going to do Zoom readings and Zoom burlesque shows, and they all suck. They’re super-flat and lame and terrible.

And I’m just like, Damn, all the shit I used to love to do is gone. And I have to take care of this kid all day! The double whammy of that is crazy. I didn’t even get to engage with the first one, because the survival mode went on. Okay, dad o’clock. And in a super-chill way, ’cause Rachel’s still making the food—I’m just kicking it with him.

But logistically, it’s fine. We’ve got a backyard. It feels dirty to complain about anything, given how hooked up we are. Kibbutz, the space, we’re gold here. We’re really gold.

Curbed: You were saying, “Oh, the kids have each other,” but you guys also have each other—do you think it’s made this a little easier on your marriages?

Gabe: I think it’s made it easier on Rachel. I’ve been a pretty physically distant husband, protecting my sleep. I go to bed at 8:30 sometimes ’cause I’m up with the kid in the morning. So I kind of ignore her, just ’cause I don’t even have the bandwidth for her, which is super-sad. And that would suck more if her best friend didn’t live downstairs.

Rachel: I spend a lot of time with Ali and Vito, ’cause Gabe has work at night and on weekends, when we would watch terrible movies together; I do that with them! So yeah, it is probably good for our marriage.

Vito: I think it’s good, much as I love my wife, to be around other people. I think I would get a little crazy if it was just one other person. ’Cause I do not leave the house.

Ali: He hasn’t been more than a block away.

Vito: It would be tougher if it was just us dealing with our kids alone. The fact that we have outlets and just get another perspective—like, seeing them with Elias gives us a different perspective on what we’re dealing with with our own kids.

Curbed: Ali and Vito, I know you’re moving soon— do you all think you’d want to keep living on a kibbutz, so to speak, if you could figure out a similar situation again?

Ali: Part of the reason we are moving is to be closer to family members, so we will have more community with family, but I don’t think there are many other people we could do this with. It’s hard to imagine trying to re-create this.

Rachel: We’ll try. Nothing can replace them. But even before COVID-19, I told anyone who would listen that this is the only way to live if you have young children. This is the way to do it. I still feel that way.