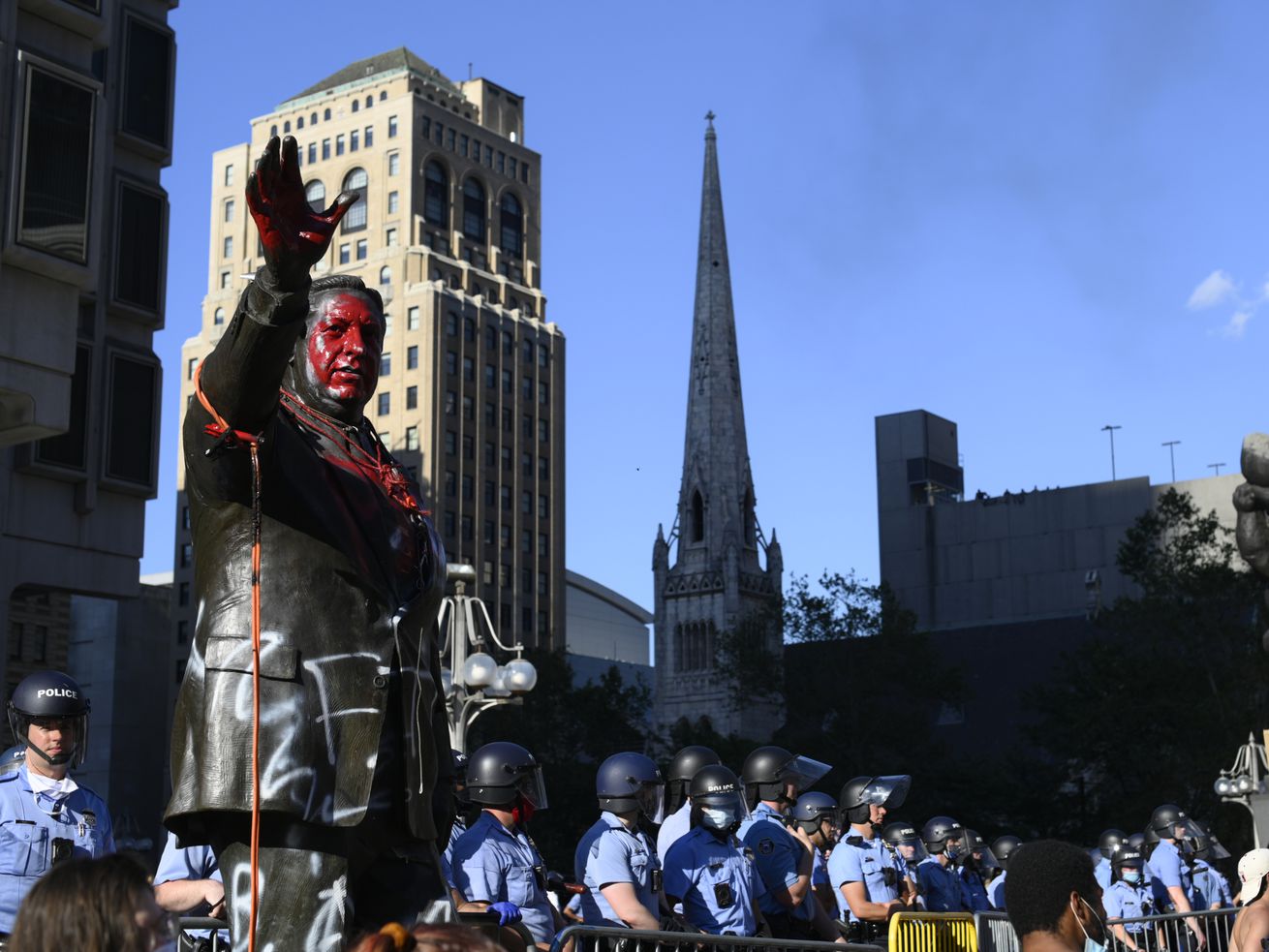 The statue of former Philadelphia mayor and police commissioner Frank Rizzo was eventually removed after protesters demanded it. | NurPhoto via Getty Images

Black and indigenous activists and organizers have been working to remove them for years, and recent protests have accelerated action.

How do you remove a racist monument? This week, the world is witnessing all the satisfyingly destructive ways.

Last night, protesters in Richmond, Virginia, toppled a statue of Jefferson Davis. Earlier in the week, they dragged one of Christopher Columbus into a pond. A bronze monument of slave trader Edward Colston in Bristol, England, met a watery demise (it’s since been fished out). An Egyptologist shared step-by-step instructions for how one might pull down an obelisk with ropes and brute force. In Boston, a statue of Columbus was beheaded. In Salt Lake City, red paint was splashed over a bronze sculpture of open hands. An art conservator shared a dastardly way to destroy these artworks: infect them with bronze disease. While paint can be washed away, corrosion is irreversible.

The viral removals of monuments symbolizing racial terror are a corrective to a culture that valorizes violence and embeds false narratives about history into its landscapes. But to what end? The real work of dismantling monuments that embody white supremacy doesn’t end by toppling a few statues — but their withdrawal from the public realm is a long overdue start.

“We are seeing the ways, in real time, how the protests are drawing connections between symbols and systems,” says Paul M. Farber, a co-founder, along with Ken Lum, of Monument Lab, an art and history studio based in Philadelphia. “These moments remind us that the processes for public art haven’t reckoned with the imperatives of anti-racism.”

This is far from the first time activists who identify as black, indigenous, or people of color (BIPOC) have directed their attention toward statues, which are among the most visible symbols of an incomprehensibly large and complex system of policies that uphold white supremacy.

Parallel circumstances in cities over the past few years have spoken to this tension. While some would say there is a renaissance of public space occurring, the exact opposite has been happening in black and brown communities with stop-and-frisk policies, hypersurveillance, and police brutality.

“That’s not merely an irony, and it’s what these protests against systemic racism speak to,” Farber says. “The public square is not simply a place of belonging; it’s a place of exclusion, and the monuments are the tip of the iceberg.”

Confederate monuments, for example, were mostly erected during the Reconstruction and Jim Crow eras, with a peak in 1910, and then in a second wave during the civil-rights movement. In both cases, according to a 2016 report by the Southern Poverty Law Center, the works were part of a larger campaign of terror. While some cities are starting to remove Confederate statues, a 2019 update to the report found that 1,747 Confederate symbols still stand. The removals of these emblems have become a proxy for the larger fight against racism. For example, the 2017 “Unite the Right” white-nationalist rally and counterprotests in Charlottesville, Virginia, were precipitated by the planned removal of a Robert E. Lee statue.

The recent removal and/or defacement of statues of Confederates, slave traders, colonizers, and known bigots, and the images circulating of these fallen monuments, is an accelerated example of cultural work BIPOC activists have been engaged in for decades. They’ve often been met by hesitation and red tape from bureaucracy and with counterarguments about historic preservation from people who want to uphold white supremacy.

“The societal system of power that’s in place put a lid on any resistance to these monuments on a popular level,” says Lum.

Take the Robert E. Lee statue on Monument Avenue in Richmond, which black activists have been fighting to remove for years. Critics of its removal used a specious argument of erasing history to defend its presence. It has been enhanced with graffiti over the past few weeks, turning it into a symbol of protest. While the governor of Virginia initiated plans to remove the statue, saying that the “divisive monument” needed to come down, two lawsuits challenged the action. A judge issued a temporary injunction, preventing the removal for now.

What’s different about the almost spontaneous removals happening in this moment is that people are tired of waiting for policy to catch up. They want change now and are enacting it.

“No monument is permanent,” Farber says. “It has an aura of permanence, but it is maintained by financial resources and political systems that keep it in place. Monuments that are intact in a city have resources behind them.”

This issue came to a head with the statue of Frank Rizzo, the divisive former Philadelphia mayor and police commissioner who was known for violent and racist law enforcement in the city and for telling people to “vote white.”

Over the years, the artwork has drawn attention from activists, who have often vandalized or reframed it. In 2012, it was yarn-bombed with a pink bikini. A few years ago, Monument Lab commissioned an Afro-pick sculpture from Hank Willis Thomas and placed it near the statue as a form of dialogue.

During the first night of protests in Philly, red paint was thrown over the bronze Rizzo. But it wasn’t the images of vandalism from recent protests that carried the most symbolic weight. It was what happened after.

First thing next morning, maintenance workers were cleaning the statue — a clear reflection of political priorities that no one could deny. For some, this was a revelation.

“The image of maintenance caught the city in a spot where it could no longer deny that this was a thing from the past; it was upkept in the present,” Farber says. “This spoke to moderate people, including moderate white people who now said, ‘I can see the problem: There are resources poured into protecting a statue we know is telling a story about racism in the city.’”

Then, images circulated of police officers standing sentry around the cleaned-up statue.

“At first read, it was like they we’re standing guard, do or die, at the Alamo for Rizzo,” Lum says. “The thought occurred to me that they could have known the statue was coming down and this was was an act of valediction on the part of the police.”

(Destroys racist statues while Enya plays in the background) pic.twitter.com/euZWN8Vsyk

Now that these symbols have been removed or covered with graffiti, there needs to be a conversation about what comes after.

“What’s the priority?” Farber asks. “Removing a wound in order to shut down dissent? Or is it to start writing the next chapter of recollection and repair?”

Over the past few years, a new wave of memorials that accurately depict history is coming into the fold, like the National Memorial for Peace and Justice in Montgomery, Alabama, which was initiated by the Equal Justice Initiative.

“Acts of truth-telling have a visual component,” Bryan Stevenson, founder of EJI, said in an interview about the power of memorials with historian Sarah Lewis. “[I]t’s going to take cultural work that disrupts the narrative in a visual way to force a more honest accounting of our past.”

Addressing the fundamental problem of racism in our country will take more than erecting new monuments or toppling old statues. As abolitionist Che Gossett said on Twitter: “Tear down all the monuments to slavery, especially jails and prisons.” Removing these visual emblems will be the ultimate accounting.