Protests Aren’t Only in the Streets

Protests Aren’t Only in the Streets 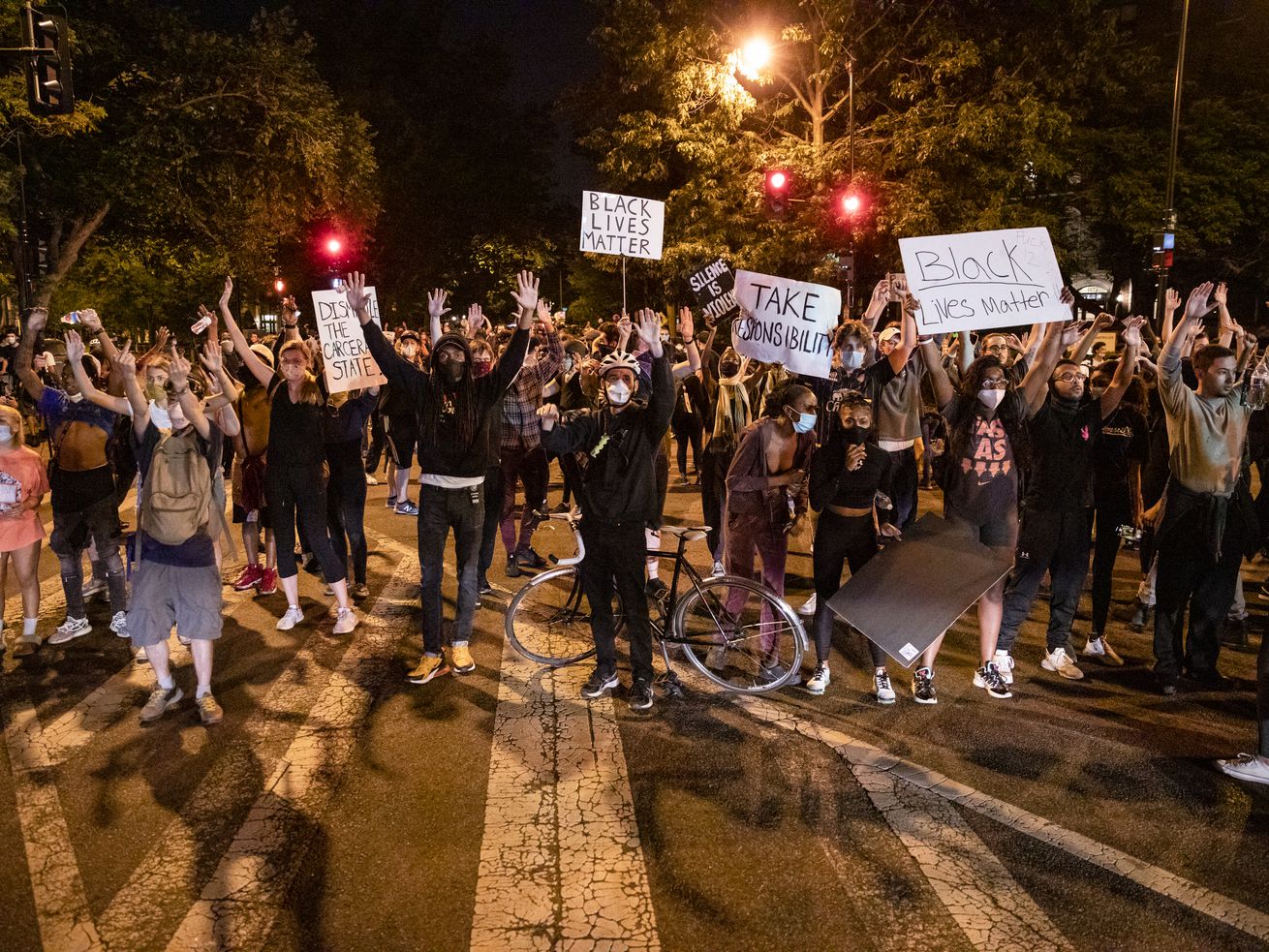 Thousands of D.C. residents took to the streets to protest the killing of George Floyd by a Minneapolis police officer. | Getty Images

Homes, theaters, and whole neighborhoods can be revolutionary spaces too.

On Monday, June 1, Meka, a 22-year-old who lives in Washington, D.C., was, like tens of thousands of others across the U.S., on the streets, fighting against police brutality and systemic racism. He and thousands of D.C. residents marched across the city. Some were in front of the White House, where they were pepper-sprayed and arrested by federal police. Others, like Meka, had marched into residential neighborhoods. As curfew fell, the police used rubber bullets against the protesters, buzzed helicopters over their heads, and arrested them by the hundreds.

With curfew behind them, and still no sign of the protest breaking up, Meka noticed that police were corralling the demonstrators, pushing off 15th Street Northwest in the Dupont Circle neighborhood and onto Swann Street, a small side street lined with townhouses. About 30 minutes passed. Then, at around 10 p.m., the tear gas and pepper spray started. Police blocked off both sides of the street and began arresting people en masse. That’s when Meka saw a man atop his stoop, waving people into his home.

Meka and about 70 others rushed into Rahul Dubey’s house. Cops tried to pepper-spray them, even as they made their way inside. “It happened so fast,” Meka says. “Rahul, nobody knew him. But he was just making sure we were okay.”

Dubey, a 44-year-old who works in health-care tech, became a viral sensation: His act of generosity was picked up by hundreds of news outlets, from Washington, D.C., to the U.K., to India. But for Dubey, his actions were the least he could do.

“Opening a door is not hero shit,” Dubey says. “And if it is, then we gotta step up.”

For the next hour, the house was controlled chaos: Many people inside had been attacked with tear gas by the police. They helped one another by pouring milk and water into each other’s eyes. When they ran out of milk, Dubey’s neighbors passed their cartons over the house’s backyard fence. “Everyone was coughing, crying, yelling,” Meka says. “And we still weren’t sure if [the police] were gonna come and get us. But then we realized we were safe.”

As the night wore on, the strangers got to know each other. A few teens hung out in an upstairs bedroom, freestyling about what had just happened to them.

“You have to make joy,” Allison Lane, another demonstrator who took refuge in Dubey’s house, says. “That’s exactly what we were doing.”

The house had become an impromptu sanctuary for the protesters, but it’s not the first time that organizers have repurposed a space for their own needs. Increasingly, activists are learning how to take the places that already exist — homes, businesses, streets — and turn them into refuges from authorities.

Battles for social justice are nearly always fought in public spaces — streets, squares, government buildings. But in the U.S., these areas have become increasingly restricted: Police control what you can do; cameras record your every movement; if you make a ruckus, you can be arrested. So it makes sense that, as public spaces have gotten less receptive to the public, alternative areas — private houses, communes, and, more recently, reclaimed public spaces blocked off from police — have emerged as a solution. In these spaces, activists can recoup, receive medical care, and, most important, start building a better world.

It’s impossible to quantify the number of people who have opened their doors for protesters in the last few weeks, but it is clear that these kinds of quasi-public spaces are growing. In New York, for example, there’s an entire campaign encouraging theaters to open their lobbies for protesters. Several have, providing snacks, water, places to charge your phone, and face masks.

On the Lower East Side, one performance venue has now turned into an impromptu community center for protesters run by communists and anarchists. (Organizers requested that the name be kept private in order to protect its safety.)

“‘Safe space’ has been absolutely ruined by conservatives,” says A., a 24-year-old artist and bartender who has helped run the space since the protests started. “But that’s the most accurate term.”

A. says there are 20 to 40 people in the center at any given time. They take volunteer shifts doing night watch to make sure that the space remains secure from police. They’re putting on workshops to teach people how to de-escalate conflicts between each other and police while out on the streets, and, A. says, this is only the beginning.

“Even if the insurrection dies down in the streets, our plan is to continue maintaining a radical infrastructure,” A. says. “What’s going on in Seattle, in Minneapolis, we have our eyes on something bigger.”

If you think of safe spaces as part of a continuum of radicalness, houses are perhaps just the first phase: You can only fit so many people in one, and, while they provide refuge, they don’t solve the larger problem of public spaces being dangerous for those who want to change the world. Quasi-public spaces, like theaters or communes, might be the next step. But now, activists are looking for more, hoping to change private space into public space, and pushing to repurpose public space into radical space.

Seattle’s Capitol Hill Autonomous Zone is the best example of this current reclamation: A cadre of leftists has taken over several city blocks and barricaded police out. Inside, organizers distributed free food at a hastily built farmers’ market, begun planting community gardens, and even held a movie night. It’s easy to see projects like this as the somewhat silly aspirations of unrealistic young anarchists. But they have an important history in creating the space needed to further revolutionary goals.

Perhaps the best example of this kind of radical-space repurposing is the Occupy movement a decade ago, which turned streets in dozens of cities into training grounds for direct action and mutual aid. In 2011, housing activist Y. Frank Southall was living at Hellarity, an anarchist commune in Oakland, when the Occupy movement spread across the country. As protesters gathered at what they had renamed Oscar Grant Plaza, police violence ensued, and protesters were frequently tear-gassed and constantly faced the prospect of arrest. Hellarity became a refuge for those fleeing the violence, acting as a bedroom, a charging station, and a meeting space for Occupy Oaklanders.

“We just welcomed people in,” Southall says. “Runaways. Queer and trans folks. It was a really beautiful space.”

At the plaza, people began creating a safe space too: Barricades were set up, and when police would attempt to enter, dozens would surround them until they left.

Southall says that spaces like these often get a reputation for being chaotic, but, in his experience, it’s the exact opposite: Community forms, people learn to rely on each other, and they experiment with new forms of living that are less reliant on the state. It’s the same whether it’s someone’s living room, a commune, or a reclaimed public park: Each is about activists taking what’s there, repurposing it, and turning it into something potentially revolutionary.

“I think autonomous spaces allow for a lot more creativity in dealing with problems,” Southall says. “Our country’s systems — housing, the entire economics of it — are designed to cause chaos. Autonomous zones are creative laboratories where we can experiment with things that work.”

At Dubey’s house, Lane says the entire experience made her feel hopeful about the future.

“I was thinking, This is like Harriet Tubman and the Underground Railroad,” she says. “It felt like revolution.”