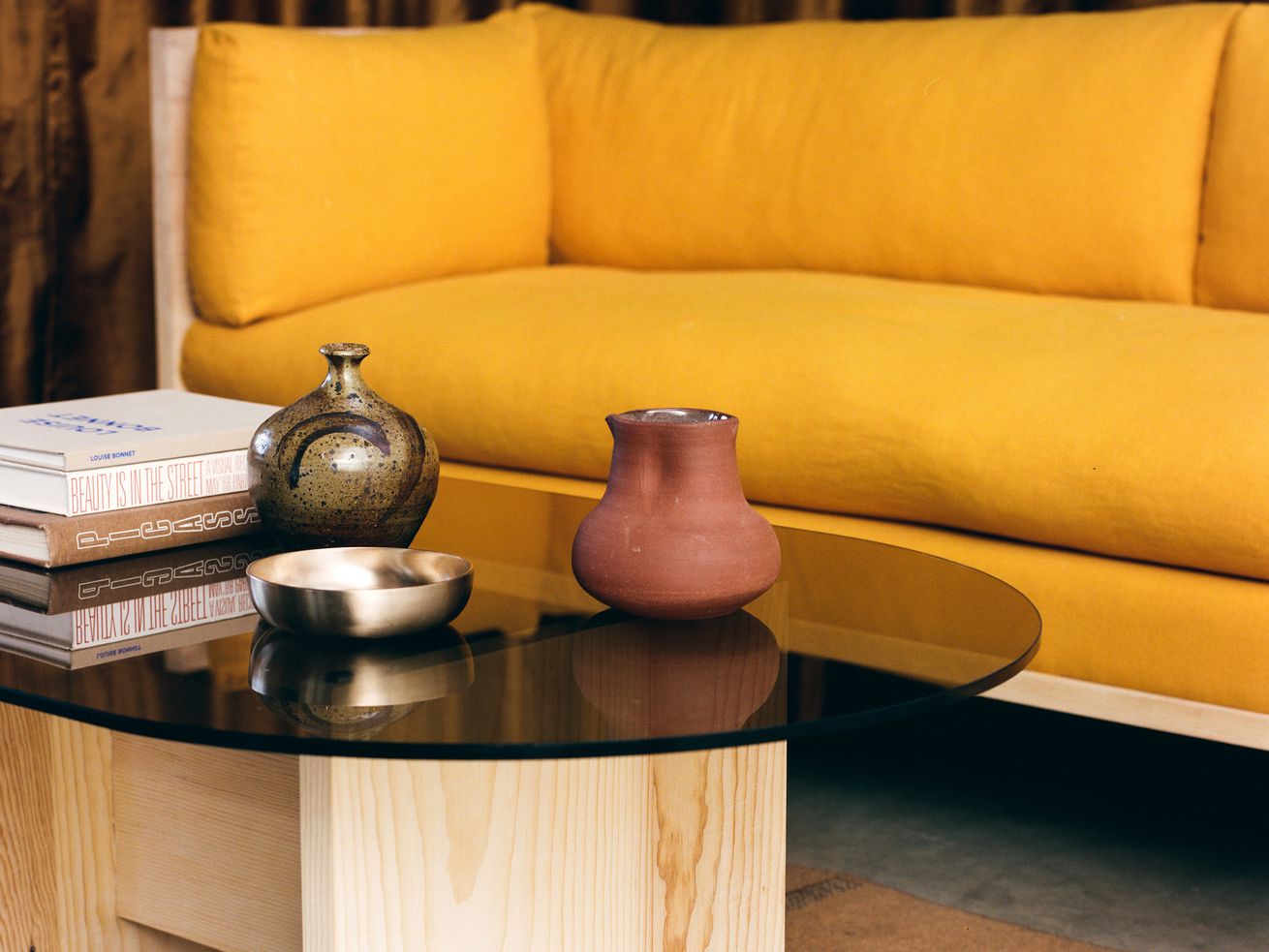 In early March, Liz Hopkins, a New York–based artist and furniture designer, loaded up a U-Haul with the pieces she was planning to exhibit in “Gristle,” her first solo show. News about the COVID-19 pandemic worsened hour by hour during the drive from Ohio, where she had been working all winter, to Larrie, the Lower East Side gallery where she was showing. She stopped in West Virginia to stock up on masks.

A few days after Hopkins arrived, Governor Andrew Cuomo issued New York’s stay-at-home order. Her show at Larrie — which includes furniture, collages, and sculpture that explore and critique lesbian erotica — was postponed. It eventually opened on May 4 and was on view by appointment through June 7, which overlaps with what would have been NYCxDesign, an annual citywide design festival akin to Fashion Week.

Amid stay-at-home orders and social distancing, NYCxDesign didn’t happen. (It is now slated for October, with programming yet to be announced.) While reopening is starting in New York City, these types of design fairs and shows are still on hold. Instead, the New York design community has had to reinvent exhibitions, rethink individual practices, and reimagine the very future of design. The shift has left emerging designers searching for a foothold.

Egg Collective, a New York–based design firm, debuted its furniture collection at ICFF, the annual trade show held in concert with NYCxDesign, in 2012, which was crucial to its launch as a company.

“We were able to present a body of work to a large segment of the industry for them to see in person, and it was the beginning of how we would present collections in the future,” says Hillary Petrie, one of Egg Collective’s co-founders. “When you are asking a client to invest in an object for their home, it is often critical for them to be able to assess the quality in person.”

Now, Egg Collective has its own (temporarily closed) showroom in Tribeca, and trade fairs are less important to sustaining and growing its business. The firm was planning a new installation for the month of May but has decided to hold off until it can safely welcome people into the showroom.

The virtual debut of Hopkins’s solo show was bittersweet. “I had an opening on Instagram Live, and as soon as the Instagram Live is done, I am in my studio alone,” she says. “All my friends are saying congrats in the comments and boom — the Wi-Fi is out and I am alone drinking hard cider. It sucked! As an artist, it’s nice to share your work with someone directly.”

Hopkins was able to sell most of her work through images of the pieces, but the artwork and furniture is meant to be seen in person. “Gristle” originated from Hopkins’s fascination with 1960s and 1970s lesbian pulp novels, which were primarily written by male ghostwriters for men. The initial idea for the exhibition was to create the opportunity for visitors to make and write their own narratives. Hopkins produced collages using imagery from pulp covers and two chairs visitors could sit in while they looked at the work. She based the chairs, which she sculpted from fiberglass and painted black, on a ca. 1919 Josef Hoffmann barrel chair. Then, visitors could spend the night inside a massive womb she formed. If they had an experience, they could write about it at a table she made, which has a base shaped like a clitoris.

“Gristle” was set to open originally on March 19th. We are excited to “open” this show tomorrow, May 4th. At 7pm, join us live for a conversation with friends @k8hardball and @liz2cool to walk through the exhibition <Green Screen Clit Desk, 2020 (fiberglass, wood)>.

A few weeks ago, Hopkins told friends she would be at the gallery and invited them to stop by. (Out of precaution, two people at a time were permitted inside.) Only half of the attendees wanted to crawl into the womb.

“This [womb] is so not the world of COVID,” Hopkins says. “You don’t want to go into a tiny space … so yeah, I think things are going to change. How the hell could this not change design?!”

The organizers of Offsite, a popular NYCxDesign fair curated by the online magazine Sight Unseen, momentarily considered postponing their show. Exhibitors experienced production stoppages with their fabricators, and even if their collections were complete, they couldn’t build sets and hire professional photographers to shoot their pieces. Ultimately, the organizers decided to press forward with a virtual exhibition in order to help promote new work — and sales — from their exhibitors, who are mostly independent designers.

“Designers really need our help now,” says Jill Singer, the journalist and curator who co-founded Sight Unseen with Monica Khemsurov in 2009. “There’s no Salone, no ICFF, no AD show. It’s hard for a designer to stand out when everyone is asking for [assistance] right now, when everyone is struggling.”

Presenting virtually still posed challenges with photography and fabrication. The solution was for each designer to receive a page with a digitally rendered “booth,” audio clip of them talking about their work, write-up from Sight Unseen’s editors about the collection’s backstory, and specifications (like dimensions and materials) for the work.

“A fair isn’t about just looking at stuff,” Singer says. “It’s about the relationship a visitor might have with a designer and relationships among the designers.”

Kalon Studios, a Los Angeles–based furniture company, came of age during the digital era and felt comfortable launching its Rugosa furniture collection online. Michaele Simmering, co-founder of Kalon, felt like the virtual offsite was done in a way that was sensitive to the pandemic and economic crisis. She especially appreciated the audio feature and how it enriched the experience. “It humanizes the screen and the work in a moment when screens are the primary way we are experiencing the world,” Simmering says.

After the virtual fair went live, Sight Unseen’s website had double its normal readership. Singer and Khemsurov declined to share numbers; they plan to survey exhibitors and participants about their experience after the fair concludes.

The design studio Jumbo — known for furniture that explores neotenic design — debuted its Creature Comfort collection, a series of objects inspired by living in social isolation, at the virtual fair. The studio — co-founded by Justin Donnelly and Monling Lee — received a lot of positive feedback about the presentation in public comments. In private phone calls and texts, there was some skepticism. Commenters tended to ask the same questions: Is this real? Has this been fabricated? The questions about production animate a divide in the design world regarding whether or not it’s okay to release physical work virtually, Donnelly says.

“Many artists feel like [making a digital] rendering [of] a physical object is akin to cheating,” Donnelly tells Curbed. “As makers of physical objects, we have wrestled with these ideas for some time. But at the end of the day, we think that virtual is here to stay. In a world where @lilmiquela is a highly sought-after model, our friend Andrés Reisinger can be a fêted furniture designer. And we are at peace with that.”

In a typical year, about 5,000 people visit Pratt students’ exhibitions during Design Week. This year, the school launched robust digital portfolios for each student. But “in the virtual world, the impromptu introductions made during an opening — a student to an alumnus who now has a design practice, an esteemed design professional who wants to meet the designer of a project they find intriguing — do not happen so fluidly,” says Anita Cooney, dean of the Pratt School of Design. “It remains to be seen how well the virtual exhibitions will do in helping the 2020 graduates make connections as they move on to the next stage of their creative life.”

Smaller, independent design exhibitions are reliably more interesting than sprawling trade shows — but the trade shows draw the crowds. In early March, when it became clear that major fairs were postponing until 2021 and travel restrictions seemed imminent, Lydia Cambron and Chris Held, curators of the annual art-design exhibition Jonalddudd, decided to postpone what they had planned until next year. (The submission period is extended until 2021 too.)

“Jonalddudd was conceived as a Design Week show, and our participation in Design Week is in itself a response, providing a platform for dissenting points of view on design and focusing on design as a medium more than a field or industry,” Cambron and Held tell Curbed. “To open outside of Design Week is possible but for us — and presumably many of our participants — would lack the larger excitement and attendance that comes with the annual Design Week fair. It wouldn’t be the same. And to what extent that could negatively impact the exhibition was very unknown.”

The work exhibited at Jonalddudd occupies a gray area between art, design, and craft. It’s also wonderfully strange and unusual. Part of the experience is seeing everything on view together, and Cambron and Held didn’t think there was a virtual platform that could show the work effectively.

“Even with detailed descriptions and dimensions in the submissions,” Cambron and Held tell Curbed, “we are still surprised by many of the pieces once we receive them in person!”

Jean Lin, curator of the cooperative design gallery Colony, had planned to hold a group show in her gallery and to launch the Design Festival NYC, which curates itineraries for design-related museums, public spaces, restaurants, and galleries to see in the city. Both are postponed.

“We’re lucky that we have flexibility to define our parameters around showcasing exhibits,” Lin says. “While we definitely are not planning any large opening events in the foreseeable future, I think small, personal viewings are just as — if not more — impactful and meaningful. At such a high level of craftsmanship as the work we have here at Colony, I feel it’s impossible to fully capture it on a screen.”

While experiencing design only through images is never the same as seeing it in person, there is a ripple effect that could be positive, according to Singer. “Fairs are exclusive and bad for the environment, and there are too many of them,” she says. “Things can get lost because there’s so much noise.”

The future of design fairs remains uncertain, but Lin predicts a change in sensibility needed to overcome whatever happens.

“Adaptability, toughness, and ingenuity will no longer be virtues but necessities,” she says. “It’s impossible to predict how this will manifest in our work, but a shift in attitude toward agility and away from excessiveness has already begun and I believe will only grow stronger.”