How St. Louis’ History of Private Streets Led to a Gun-Brandishing Couple

How St. Louis’ History of Private Streets Led to a Gun-Brandishing Couple 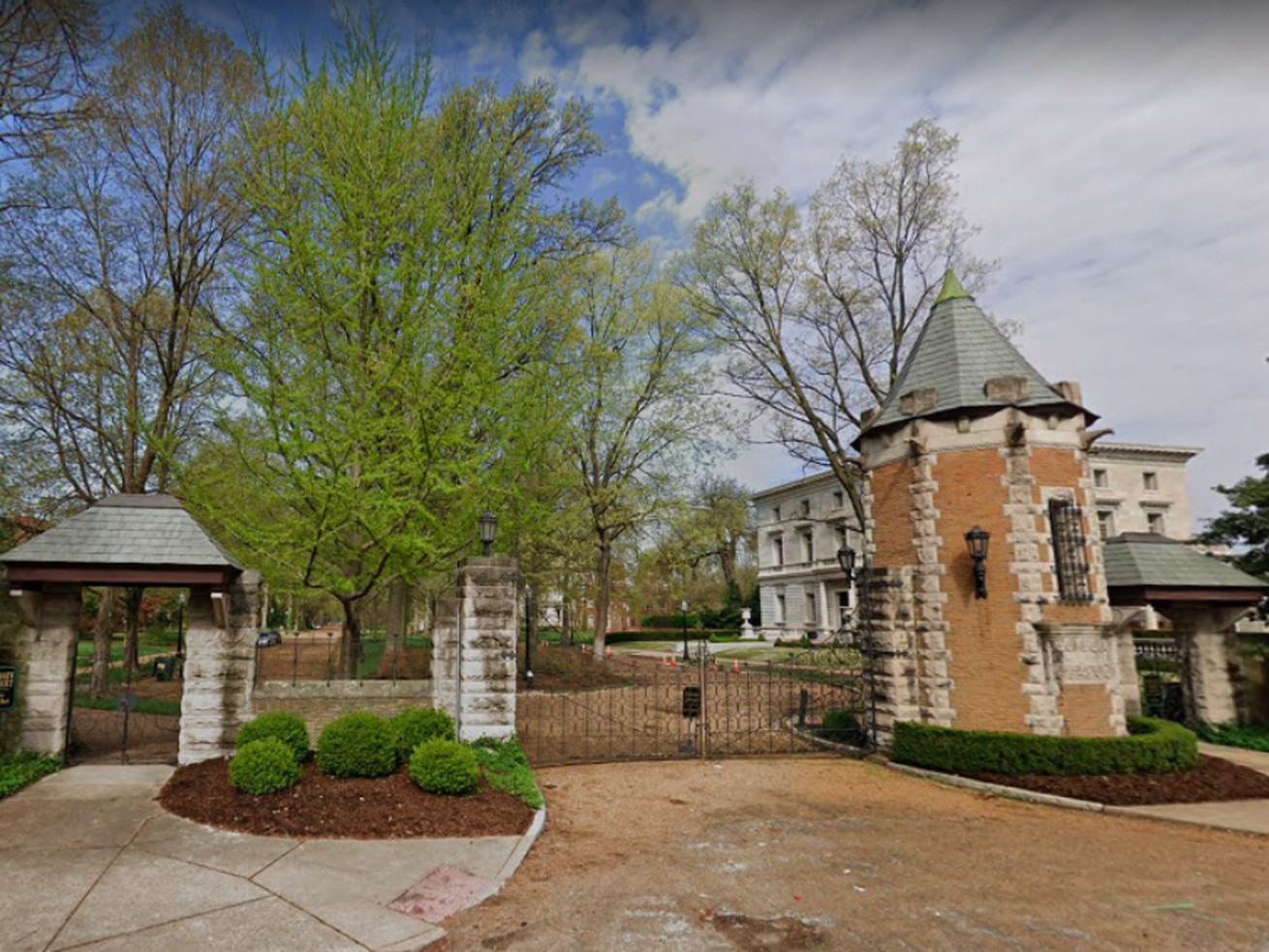 A Black Lives Matter march through a gated community highlighted the decisions that divide the city.

If you were in St. Louis and wanted — hypothetically — to eat the rich, 1 Portland Place would be a good place to start.

The limestone-and-marble palazzo found at that address looms high above the hedge-fringed retaining walls lining Kingshighway, a major north-south thoroughfare where cars stream by at all hours of the day. But between the busy road and this street punctuated with opulent homes is an imposing stone entranceway with wrought-iron gates — one of many such structures St. Louis has built throughout its history to divide its communities.

Designed in 1909, the 18,000-square-foot mansion was a wedding present for Anna Busch, the daughter of beer magnate Adolphus Busch, whose name adorns the city’s ballpark. The mansion was purchased in 1988 by its current residents, Mark and Patricia McCloskey, personal-injury attorneys whose office is located in another mansion they own a 15-minute walk away. In a splashy St. Louis Magazine feature, the McCloskeys detail their “difficult” two-decade journey to restore 1 Portland Place’s marble staircases and damask silk walls — some of which required traveling to Italy to see the original Renaissance-era palaces that the home was modeled after.

The surrounding Central West End neighborhood is known for its lavish houses, well-groomed residents, and manicured landscaping. But on Sunday evening, the occupants of 1 Portland Place were pacing their front lawn in bare feet and mustard-stained shirts, brandishing firearms which they pointed at hundreds of Black Lives Matter protesters streaming down the sidewalk.

The protesters weren’t there to see the McCloskeys, they were just cutting through Portland Place on the way to the home of St. Louis Mayor Lyda Krewson who, on Friday, publicly read a list of names and addresses of constituents wanting to defund the police department. (Krewson owns a Central West End brownstone just a few blocks away.) But taking this street became a symbolic moment in itself as the protesters toppled the century-old roadblocks intended to keep St. Louis’ white ruling class separated from the rest of the city.

Although videos show protesters walking through an open gate which appears undamaged, Mark McCloskey told KMOV that protesters “smashed through the historic wrought iron gates of Portland Place, destroying them, rushed toward my home where my family was having dinner outside and put us in fear of our lives.”

“Private property, get out!” Mark McCloskey yelled at the protesters in a St. Louis Post-Dispatch video, emerging from between two-story white pillars and cradling an AR-15 assault rifle, as the crowd began a call-and-response: “Whose streets? Our streets!”

“We’re on the sidewalk!”

“This is all private property,” said Mark McCloskey to KMOV. “There are no public sidewalks or public streets. We were told that we would be killed, our home burned and our dog killed. We were all alone facing an angry mob.”

Private streets remain a stubborn relic of St. Louis’ Gilded Age. Homeowners paid for the streets and sidewalks to be paved long before the surrounding arteries were maintained by the city. In doing so, they purportedly reserved the authority to decide who could use them, which, according to an 1895 story in the St. Louis Republic, was “a privilege, not a right.” Whether they still functionally or symbolically shut people out — one can easily enter Portland Place just around the corner from the gates — the ornate gates, guard towers, and black powder-coated signs denoting “private street” in gold-embossed serif type dot the St. Louis urban landscape as reminders of these restrictions.

A revitalized movement to limit access to St. Louis streets emerged during the 1970s and 1980s, when the population of the city dwindled to half of what it had been in 1950, largely because white families moved to the surrounding suburbs. By the time Mayor Vincent Schoemehl left office in the mid-1980s, 285 streets had been blocked or diverted, most by decidedly less ornamental concrete bollards known as “Schoemehl pots.” One program, entitled “Operation Safestreet,” was praised at the time for lowering crime rates, though the long-term benefits have been less clear. In recent years, advocates have been trying to undo the closures in an attempt to knit the city back together, but some residents want to keep their cul-de-sac streets, especially the ones concentrated in high-wealth, predominately white areas like the Central West End.

.@AttyMcCloskey lookin real primitive out here pullin guns on protestors. They live in a huge castle right off of the Delmar Divide. Feet away from where the life expectancy drops by 20 yrs, inadequate prenatal care increases by 22%, & an over 200k diff. in home value. #LydasCrew pic.twitter.com/hQXLFVVn2y

There’s yet another another street-level delineation that keeps the Central West End exclusive: Delmar Boulevard, the east-west artery just a few blocks to the north, creates a barrier known as the Delmar Divide that slices through the city. Historically, neighborhoods north of Delmar were redlined because they were home to predominantly Black communities, while white families to the south received federal loans to buy or improve properties — funneling government capital directly to the renovation of those mansions.

The economic disparities are firmly entrenched. On Portland Place, a 1891 Queen Anne Victorian is on the market for $1.4 million. A few blocks to the north, just on the other side of Delmar, a six-bedroom home built four years later is for sale for $54,000.